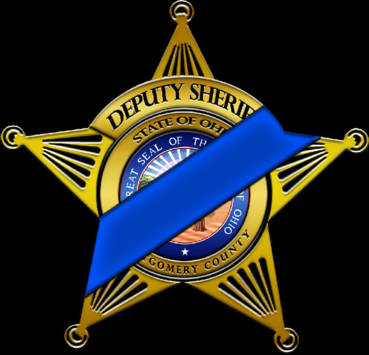 The Thin Blue Line is a controversial symbol that law enforcement officers in the United States use to identify other officers, their spouses and other family members.

The conceptual "Thin Blue Line" is derived from the historical Thin Red Line. Proponents of the symbol claim that the blue strip between two larger blocks of black symbolizes the police's role of separating the "good" from the "bad", or protecting society from chaos. A second interpretation has the colors representing the memories of fallen officers (black) and the bonds of those who remain (blue, a color long associated with law enforcement).
Courtesy of Wikipedia

The BLACK ribbon represents the deaths of the Officers;

The single GOLD star is displayed upside down to represent the grief and loneliness felt by all members of our brotherhood alike when an Officer is slain. It breaks the line, which represents the momentary break in the thin blue line as we all pause to mourn our dead.